After the ‘official’ Prints for Prints workshop wrapped up in Bahir Dar, our team split up for some more exploring.   Steve Bloch and Bill Purcell headed up to Lalibela and I headed south to Arba Minch with Constance Spurling.   Each pair packed along a printer in case there were more opportunities to spread the Prints for Prints love along the way.

Constance and I stayed at an absolutely magical place outside of Arba Minch – aptly named Paradise Lodge.  I was anxious to explore a new part of Ethiopia and top of the list was to go to the Nechisar National Park to see some animals (Zebras! Crocodiles! Hippos!)   Little did we know the highlight of the trip would be the people we met along the way.    We hired a boat, a guide (Temesegn aka Tom) and a guard/scout (armed with a rifle, but mandatory for all visitors to the national park) and set off across Lake Chamo.    Hippos?  Check!  Crocodiles?  Check!  All within 10 minutes of our journey. 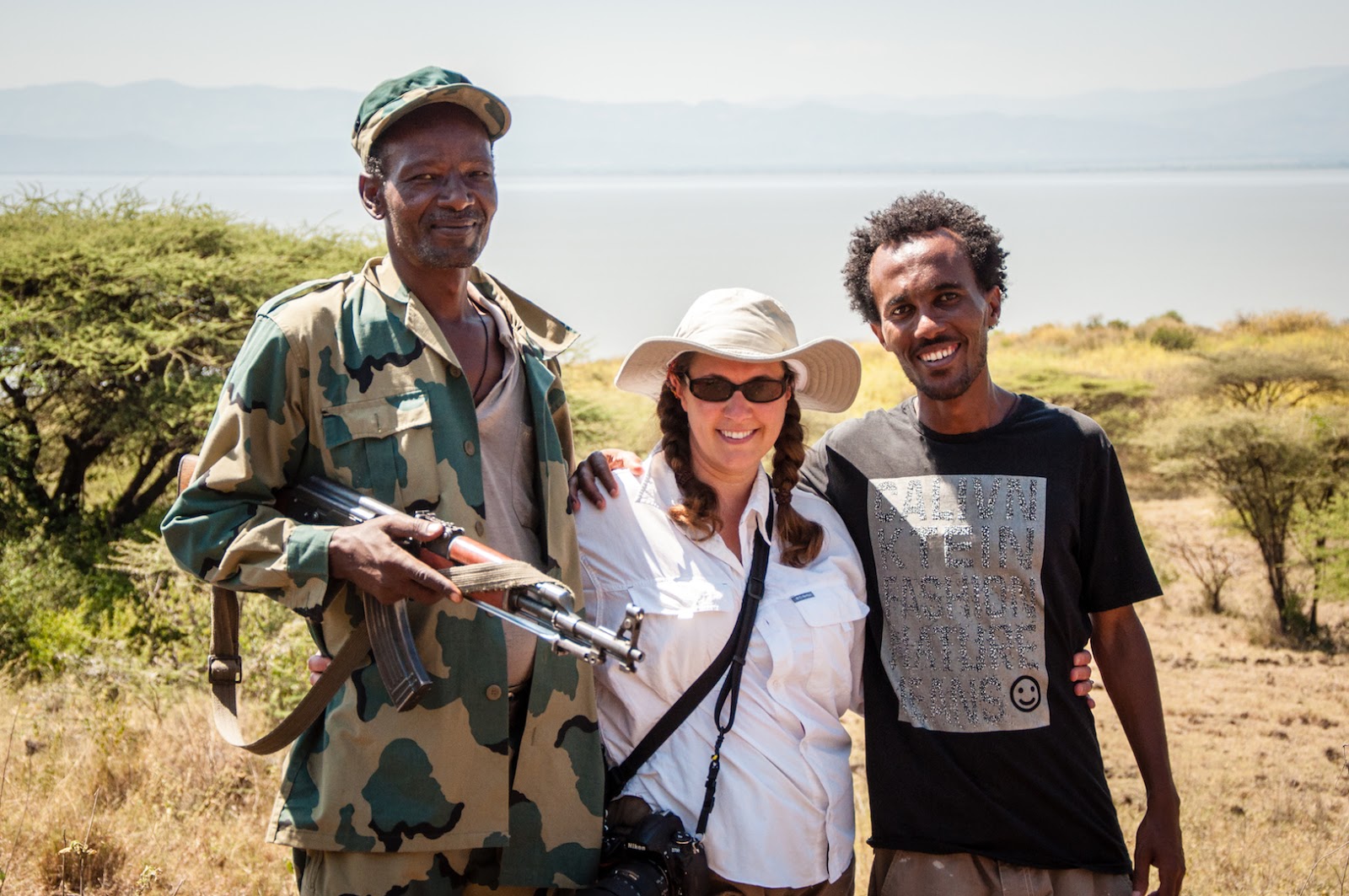 Constance with our guide Tom and the scout.

After about 90 minutes, we finally were getting close to land and noticed a couple papyrus rafts along the shore and a couple men came down to shore to wave to us.    Tom directed the boat to pull in and we hopped out.    We climbed up a narrow little path and passed some signs of a rustic campsite – a couple tarps, a chicken, some plastic bottles and containers.   Several men welcomed us in to a clearing where there was a large platter of fish (mainly raw) and bread.   Constance was brave and ate the fish, which was fed to her by hand by the men, as is often the custom in Ethiopia.  I (the wimpy vegetarian) ate some bread.  They generously shared their food with us and allowed us to take a few photos. 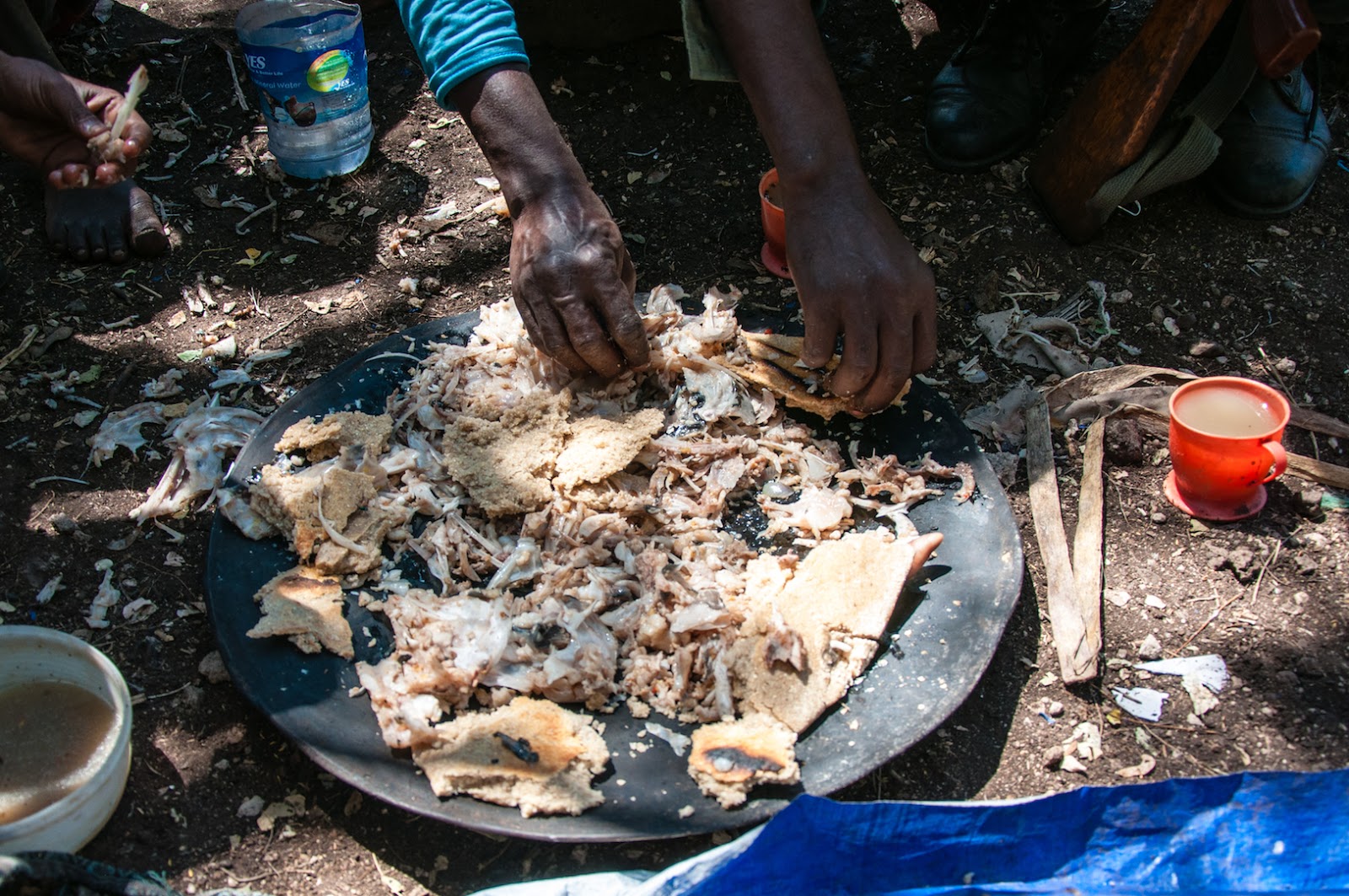 The fishermen were ‘squatting’ on the National Forest land.  They would leave their village for 2-3 weeks to come to this spot and set up fishing nets.   Guides like Tom serve as a ‘ferry’ service for the fish they catch and bring it to market.   After a couple weeks, they return home for a week or so, then begin the cycle all over again.    It’s an extremely dangerous and hard occupation.  In fact, two fishermen were killed by crocodiles in the weeks prior to our visit.    Clearly the small, lightweight papyrus rafts offer little protection from the crocodiles. 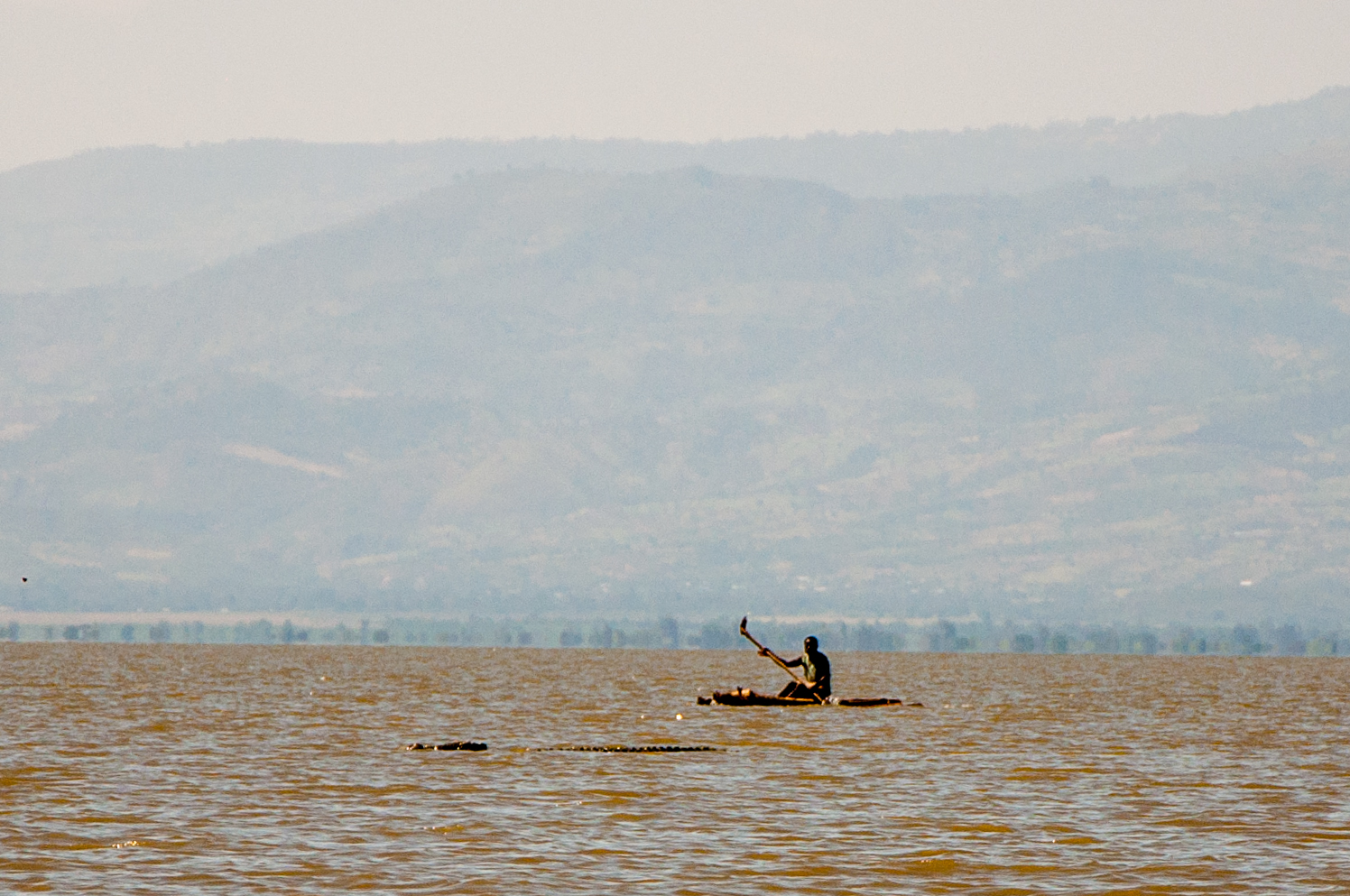 Note the crocodile in the foreground.

Both Constance and I had the ‘aha’ moment as we were sitting and talking to them that we would love to be able to give them prints to take back to their families in the village.   Given the perilous nature of the work, they truly didn’t know if they would safely return after each trip.   It was a powerful reminder of how something as simple as a photo print can provide comfort for the family left behind.   Luckily, Tom runs this route on a fairly regular basis and agreed to deliver the prints to them.  So we rushed back to the lodge and cranked out some prints on the Canon Selphy.   I wish we could have gone back to deliver them in person.    Yet another example of the hospitality of Ethiopians – people who have so little by American standards will graciously share everything they have with random tourists who come tromping in to their campsite.   And expect nothing in return.   A print might not be much but it is at least a token that we as photographers can give instead of just ‘taking’ a photograph. 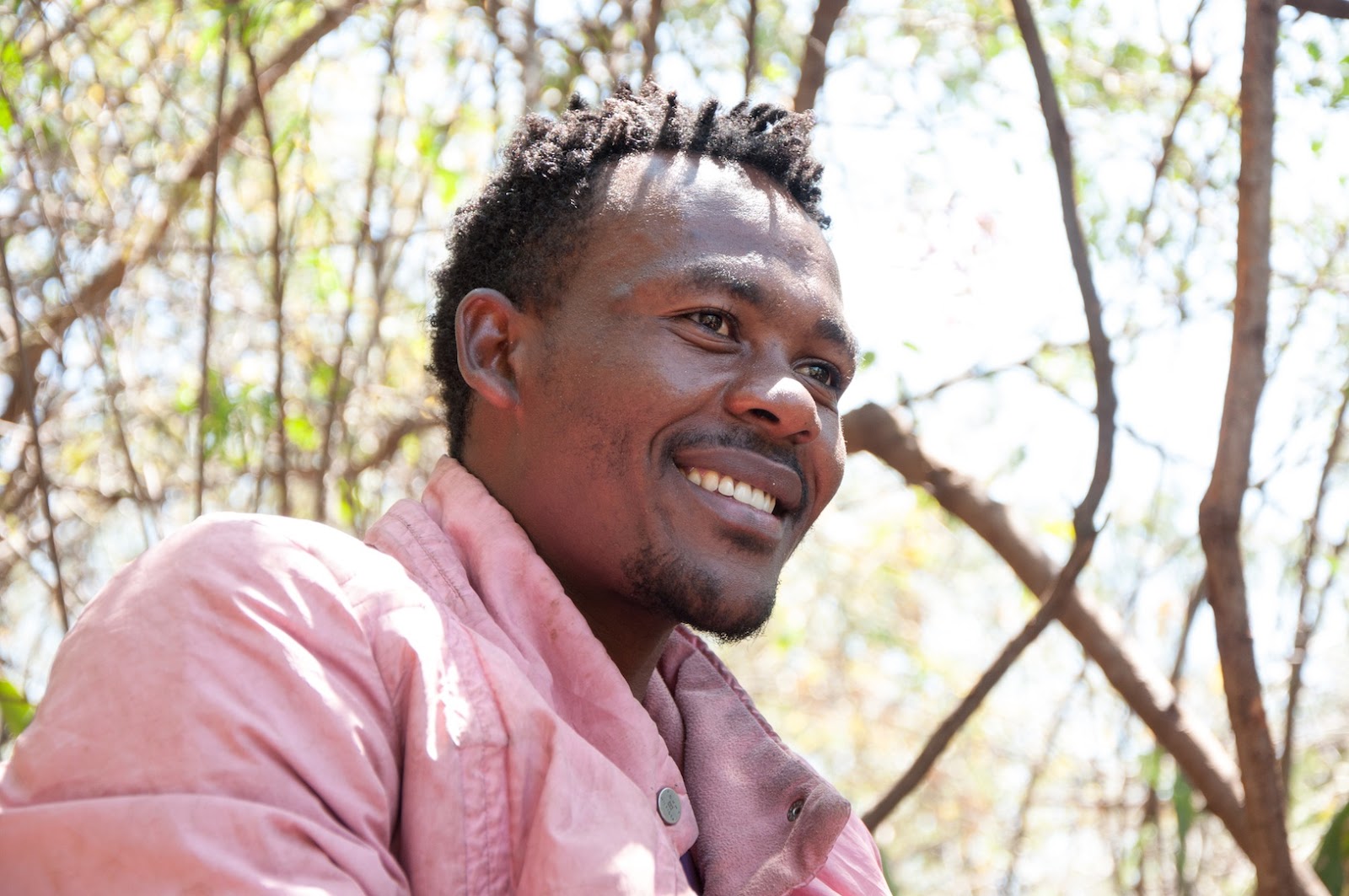 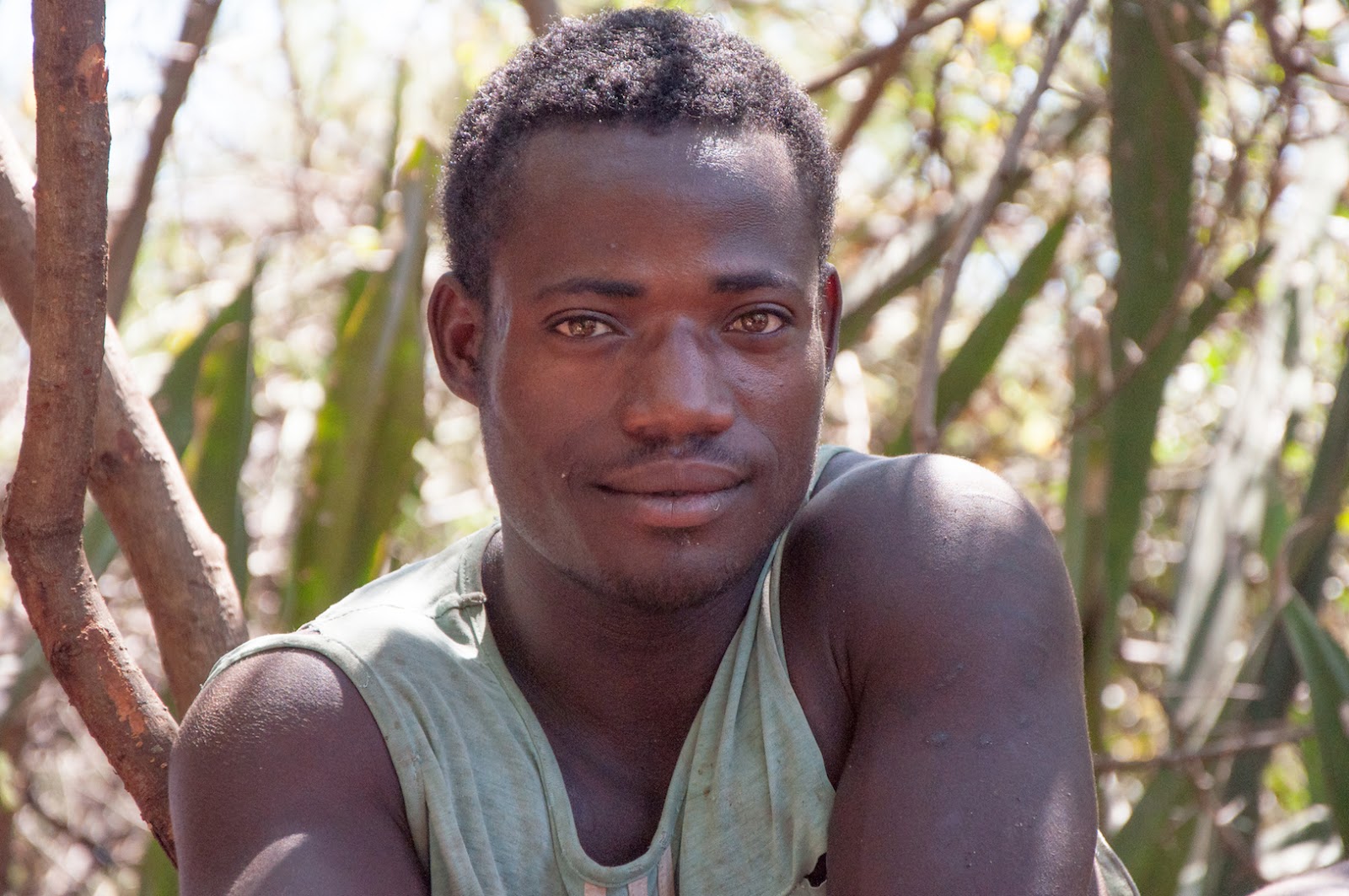 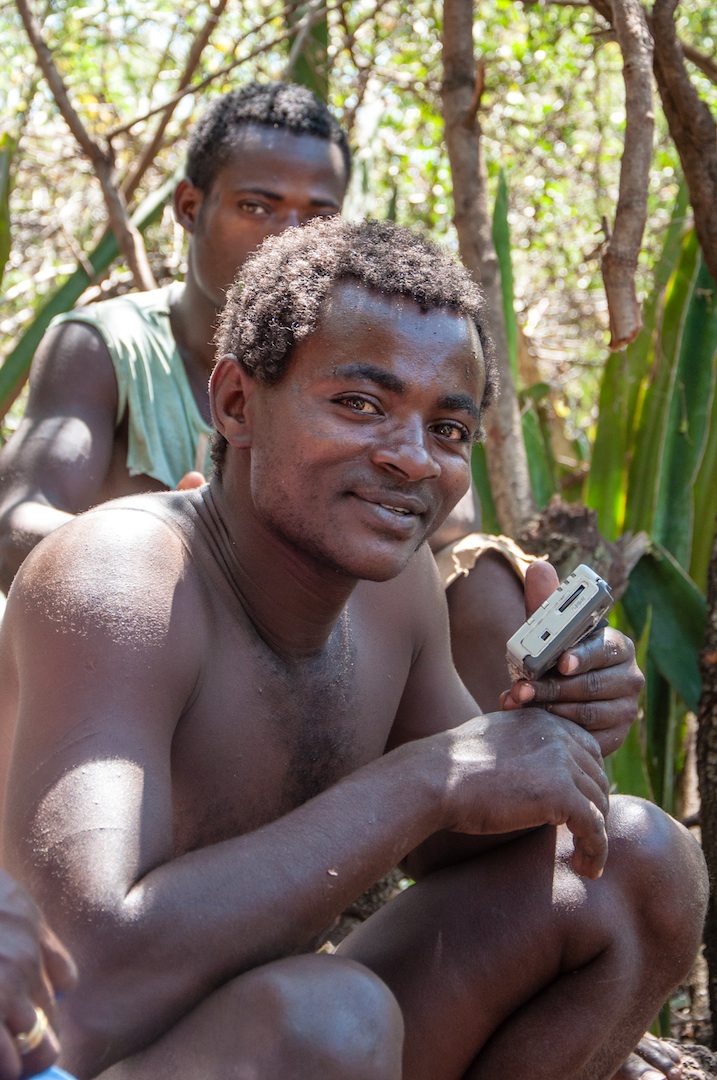 This is just one small example of Prints for Prints in action.   I don’t think I will ever travel without packing along a little printer!
Constance wrote a great blog entry (with more pics!) about our day in Nechisar.  Check it out!

Posted by heathre at 8:35 AM No comments:

I leave Sunday for my second trip to Ethiopia this year.  It's hard to believe it's been 10 months since I was there but also feels like no time at all.   I'm excited to be part of a great volunteer photography project - Prints for Prints.    I'm hoping to do some blogging while I'm there although as you might notice, I'm not the most timely blogger (since my last post was from March!)

Here's a pic of our our awesome team.   I'm thrilled to be a part of such a great project and amazing group of photographers.    We will try to post over at the Prints for Prints website, so check there too!  I'll also be posting on instagram (heathre) and Facebook.

Thanks for all your love and support! 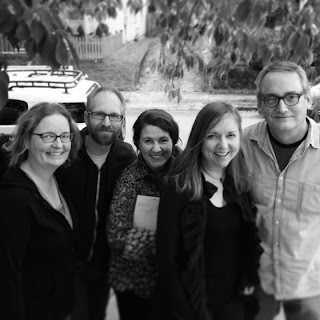 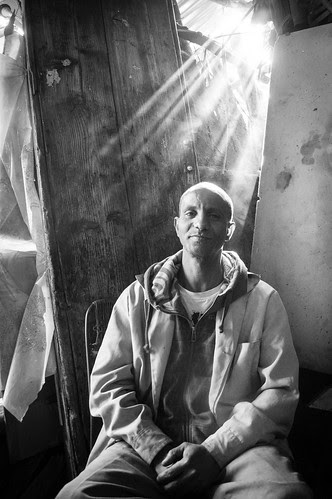 Via Flickr:
We met Birhane when we stopped at a little souvenir stand across from the castle complex in Gondor. His 3 year old daughter Luzan was 'helping' me pick out a souvenir and we started chatting. Of course, he invited us in to his home for coffee. We spent close to an hour drinking coffee, hanging out with the kids and hearing his story. His oldest daughter Lilna was an excellent reader and proudly read one of her english books for us.

Birhane fled Ethiopia in the early 80s through Sudan and traveled by foot to Egypt, where he took English classes and worked for 10 years. He was one of the few people we ran across that didn't immediately reference Obama when he heard we were Americans - Birhane loved George Bush because of the English language education program run by Americans. Eventually he was deported from Egypt. He couldn't claim asylum there because he had first passed through Sudan. When he returned to Ethiopia, he returned to a small shack/stall by the castle (left to him by his parents, who passed away while he was gone) where he set up a little shop. He met his wife Yezna and they now have four children. He said "Life is very hard but look at my daughters, I am so lucky". He has completed training courses through the Ethiopian Ministry of Culture and Tourism and hope to start a workshop so he can preserve and pass on the cultural craft traditions. 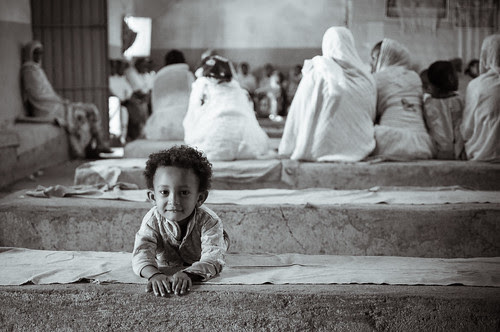 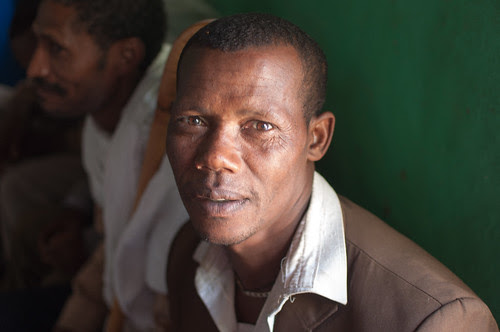 Via Flickr:
Gondar, Ethiopia
After getting completely lost on the way to the 'angel ceiling' church, we stumbled across another church celebrating St. Mary's day. They invited us to join them in their community meal - as often happens in Ethiopia, we were welcomed with open arms. This man helped serve the food and drink and finally had a chance to sit down and eat. As we were leaving, he asked if I would take his picture. This is one of my favorite portraits from the trip.

Posted by heathre at 8:30 AM No comments: 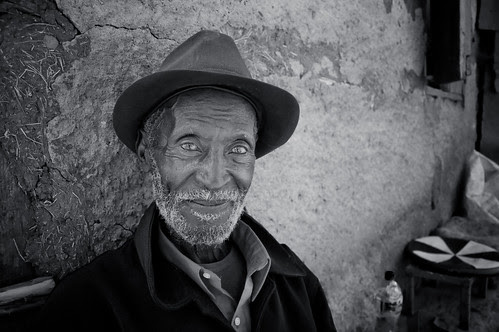 This is one of my favorite portraits from my trip. I've barely begun to sort through all my photos, so I hope there are many more buried treasures as I sift through them.

Though the road seems familiar...we're just remembering where to go 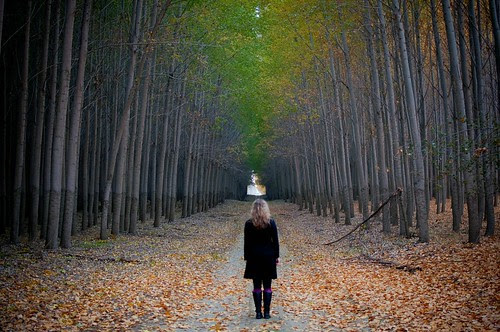 Though the road seems familiar...we're just remembering where to go, a photo by heathre on Flickr.
Lovely write-up on this photo on Photo Shutter blog/online magazine.

This line in particular really nailed it:
It’s the beginning of a journey. The destination is visible, the ending isn’t clear. Perhaps the traveler in this photograph is anxious to begin. Or perhaps she’s afraid…because she’s been there before. To me, the photograph is not necessarily a happy photograph, but it is a positive one. It’s a representation of that big step forward, the first step of a journey or the beginning of the next chapter.
Posted by heathre at 11:20 AM 3 comments: 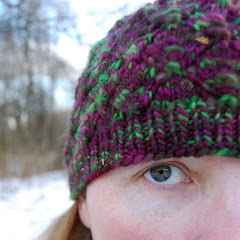